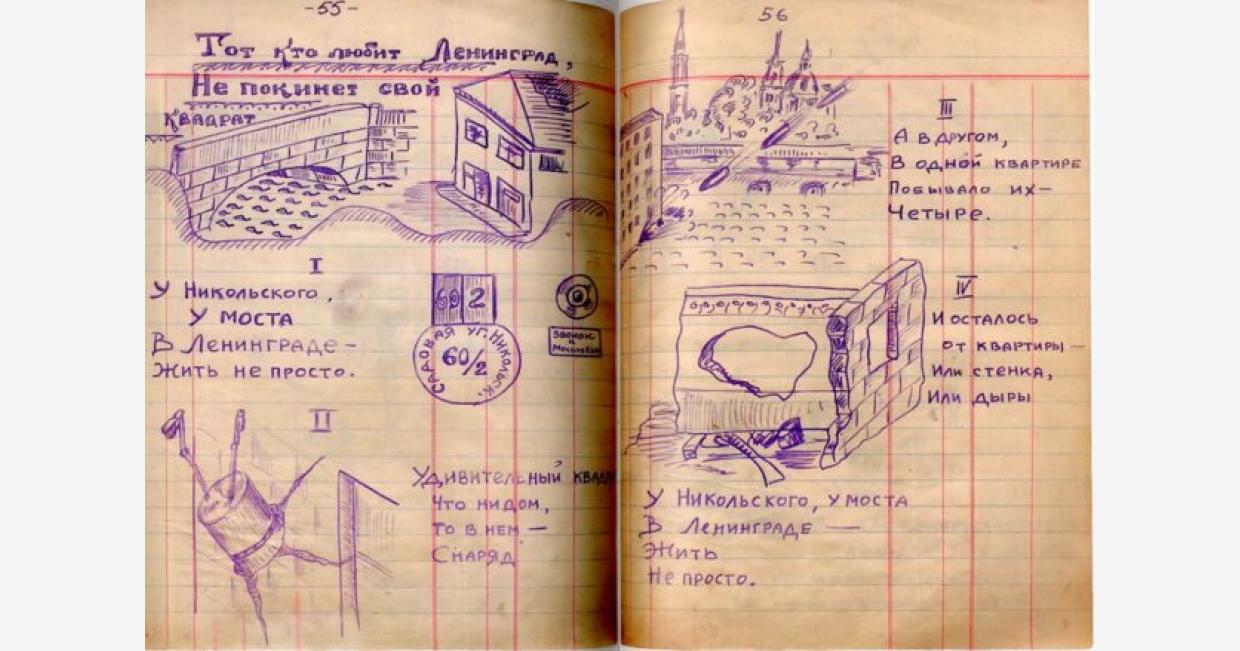 A few days ago I was sifting through an online diary project and found this little gem, a nicely illustrated and amazingly life-affirming diary of Leningrad siege survivors, which looks not so dissimilar to some Holocaust survivors' diaries. It was written by Konstantin Vasilievich Mosolov (1905-1970, Admiralty shipyard trade school teacher) together with his son Kostya. They lived on Sadovaya street, 60 - just opposite the Nikolsky market and close to the Novo-Nikolsky bridge. For the sake of preserving the meter of the poem I translated "Nikolsky" as "St. Nicholas" - which is what it essentially means. The letters "BT" coming from the speaker stand for "air raid alert". The plaque on page 3 reads "Ladoga lake" - the only evacuation route from Leningrad, also called the Road of Life. The piece of paper painted in the top right corner of page 4 is a set of bread rationing coupons, and at the bottom left there's a drawing of a bricked in window with a firing embrasure (a common sight in Leningrad where a lot of buildings were prepared for urban fighting), and the plaque on it warns of the danger of artillery shelling.

This entry was made in the end of October, 1943. By that time, the worst days of the siege were already over, as the mass starvation that led to the deaths of around 800 000 civilians ended by late August 1942. By February 1943 food rationing in Leningrad was finally brought to the same level as in the rest of the country thanks to the narrow land corridor the Red Army managed to liberate in January 1943. However, the German army did their worst to compensate for the lack of deaths of starvation by deaths caused by artillery shellings. At the time when Army Group North started preparing for its withdrawal to the Panther line, it severely ramped up the shelling of the city from its heavy long range guns that it had been amassing since September 1941. Two years later a record number of 18 000 heavy shells per month rained down on Leningrad. In order to provide an extra warning for civilians the government ordered to paint plaques that read: "Citizens! This side of the street is the most dangerous during artillery shelling!" The dangerous sides were the ones that faces south and southwest - the areas of German artillery groupings.

In this book we'll record everything that Leningraders, Kotya, daddy and mommy in the days of the Great Fatherland War went through.

May the pages of this book make you hear the wail of sirens, whistling of airbombs falling down, thunder of high explosive bursts and snakish hissing of artillery shells which deface our beloved streets and houses, our dear Leningrad hearths, may you hear the cries of children orphaned in the winter of 1941-1942, the moans of people buried alive, reminding you of the great sacred duty to avenge the hated enemy, fanning the flames of hatred towards the accursed Fascism. 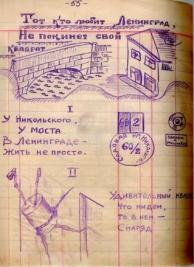 He who loves Leningrad
Won't abandon this quandrant

At the Bridge
of St. Nicholas
Life in Leningrad
Isn't easy 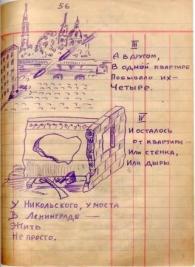 At the Bridge
of St. Nicholas
Life in Leningrad
Isn't easy 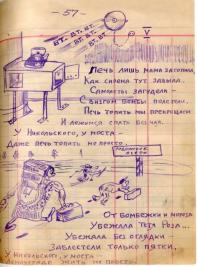 Just when mommy heated the stove
Sirens started their howl
Airplanes buzzed overhead
Shrieking bombs fell down like mad
We put out our fire
Drink no tea and fall asleep tired
At the Bridge
of St. Nicholas
Even drinking tea
Isn't easy

Auntie Rosa fled so fast
From the cold and bomb blasts
She fled so fast from the city
That her feet got really heated
At the Bridge
of St. Nicholas
Living
Isn't very easy 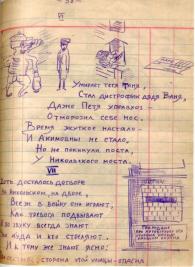 Auntie Tanya is dying now
Uncle Vanya has withered down
Even Petya the maintenance guy
Had a really bad frostbite
There came a truly horrible time
That's when Akimovna died
But they all served their mission
At the Bridge
of St. Nicholas

Although the kids had it hard
In the St. Nicholas lane's courtyard
They are playing war again
And howl to the sirens' wail
And they can tell by the sound
Of who and where and what is firing
They have also learnt which sidewalk
Is the worst to be on when shells fall 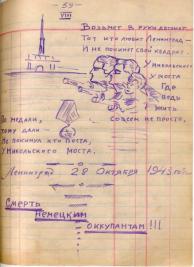 He who loves Leningrad
Will take a rifle in his hands, -
And he won't abandon his post
By the bridge of St. Nicholas
Where life isn't so easy.
Everybody is an hero
Everyone who persevered
Got a medal for that feat
At the St. Nicholas bridge 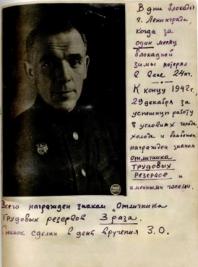 Here's this very house today and the view of the bridge and St. Nicholas cathedral from it: 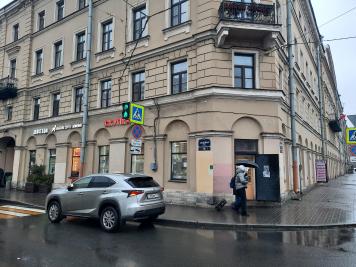 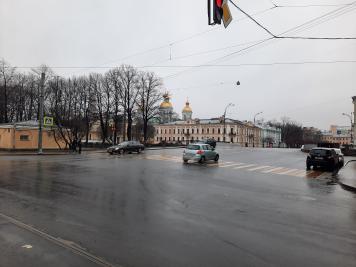