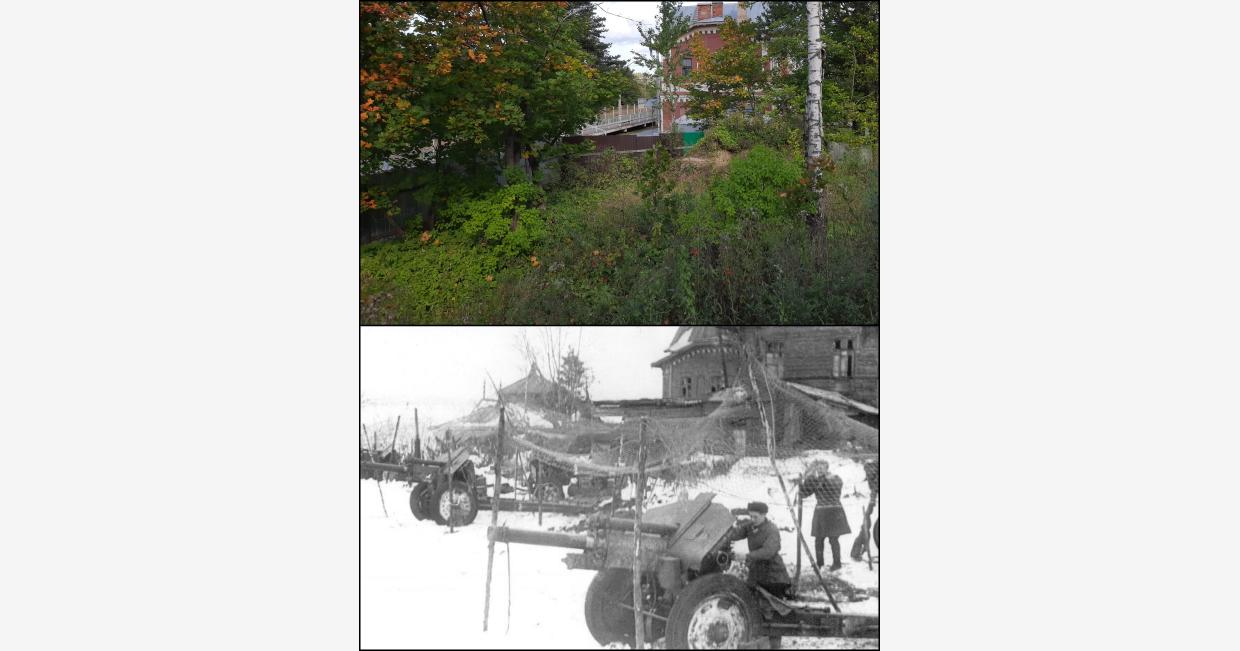 Soviet 122mm M-30 howitzer battery deployed next to the train station building. The picture was taken from almost the same spot as the one in my previous post.

From the memoirs of Shalov Ivan Afanasyevich, Senior Sergeant, commander of a 37mm AA gun in 1944:

"After the liberation of Krasnoye Selo our troops pressed on further. In the night from January 20 to January 21, as the offensive continued to develop, our battery and one anti-tank gun battery, along with a vanguard rifle battalion reached the northern outskirts of Taitsy settlement and the train station of the same name. We kept digging entrenchments for our guns on the slopes of a low hill up until dawn. To the right of us the soldiers of an AT battery were digging in. At dawn on January 21st the Germans pulled their forces to this area, and having found out there was only a small Soviet force facing them, started a counterattack.

At first we were so surprised we didn't even understand what happened. Both our and German solders wore white camo fatigues. We even wondered: why are our guys shooting at us? But when SMG and machine gun fire started and bullets whizzed over our heads, we realised what was going on. Rangefinder operator Vasily Snegiryov looked through his optics and screamed: "These are Germans running and shooting at us!"

It appeared that at the very time when our infantry formations retreated along the field just to the left of our positions, the Germans surged towards us. We opened fire at their infantry chain and pinned them down. Then they opened mortar fire at us. During this shelling the battery commander was shell shocked and Lieutenant Skripnik was heavily wounded. In this critical situation I had to take control over the battery, although I had a rather low rank at the time - Senior Sergeant. That said, I was also the Party organiser of the battery.

So I started taking active action. First I ran to the neighbouring AT battery in order to coordinate our joint tactics. We agreed on the following: they will shoot at the tanks and we'll shoot at the infantry from our automatic guns. When the German infantry started encircling us, I immediately ordered: "Destroy the infantry in your sectors! Fire!" And we struck at the enemy with long volleys from our guns.

I've got to tell you our AA shells fell rather densely and mowed down the fascists without mercy. But then an enemy machine gun started riddling our battery with explosive bullets. WIAs and KIAs appeared. It became impossible to stand by the gun and continue firing it. When several of our guns were silenced, the Fritzes rose up and started approaching our battery, showering it with their SMGs.

And then I suddenly managed to determine the exact location of the heavy machine gun, which had been mowing us down all that time. It appeared that all that time the machine gunner sat in a church bell tower located nearby. Then I crawled to the nearby AA gun and fired a long volley in the direction of the belfry, which missed its mark. When we fired the second time, we not only managed to take out the machine gun, but also an enemy observation post.

Then we continued firing at the German infantry which almost managed to reach us, being in only 200-300 meters from our defensive positions. Soldiers from signals and scout detachments of the vanguard battalion started shooting their rifles. The soldiers of the AT battery started firing at German APCs which appeared unexpectedly.

In the heat of this heavy fighting the commander of the regiment Lieutenant Colonel Kalinichenko made it to our defensive positions on his Willys jeep under fire. He arrived specifically in order to organise the troops to repel the enemy counterattack. However, sometime later mortar shelling started and he was wounded by a piece of shrapnel. He was immediately evacuated to a military hospital.

Throughout the whole day we continued to fight off enemy attacks. This day, however, gave us a valuable lesson: we could see for ourselves that our automatic AA guns were a very formidable weapon, even when fighting an overland enemy. The whole field around the battery was littered with enemy corpses.

Still, just to the left of our battery German infantrymen managed to drive somewhat deeper into our positions and outflank them. By the end of the day the fighting resumed again: a German ski battalion which approached the battery immediately attacked it and we had to stay on the defensive.

Luckily for us, the offensive of our troops continued soon. Regiments of our 7th Anti-Aircraft Division advanced along with other units, destroying German forces on land."

Shalov's gun, presently displayed in the Artillery Museum in St. Petersburg, is considered to be the most renowned AA gun in Russia. Throughout its service with Shalov's crew manning it, the gun shot 18 enemy planes down, making its commander the second highest scoring anti-aircraft gun ace in the Red Army.

In August 1944 Shalov's candidature was recommended for the Hero of the Soviet Union decoration, however for unknown reasons he was not awarded it, receiving the Order of the Red Banner instead. At the same time some AA gunners were given HSU medals for downing only 5 enemy planes.