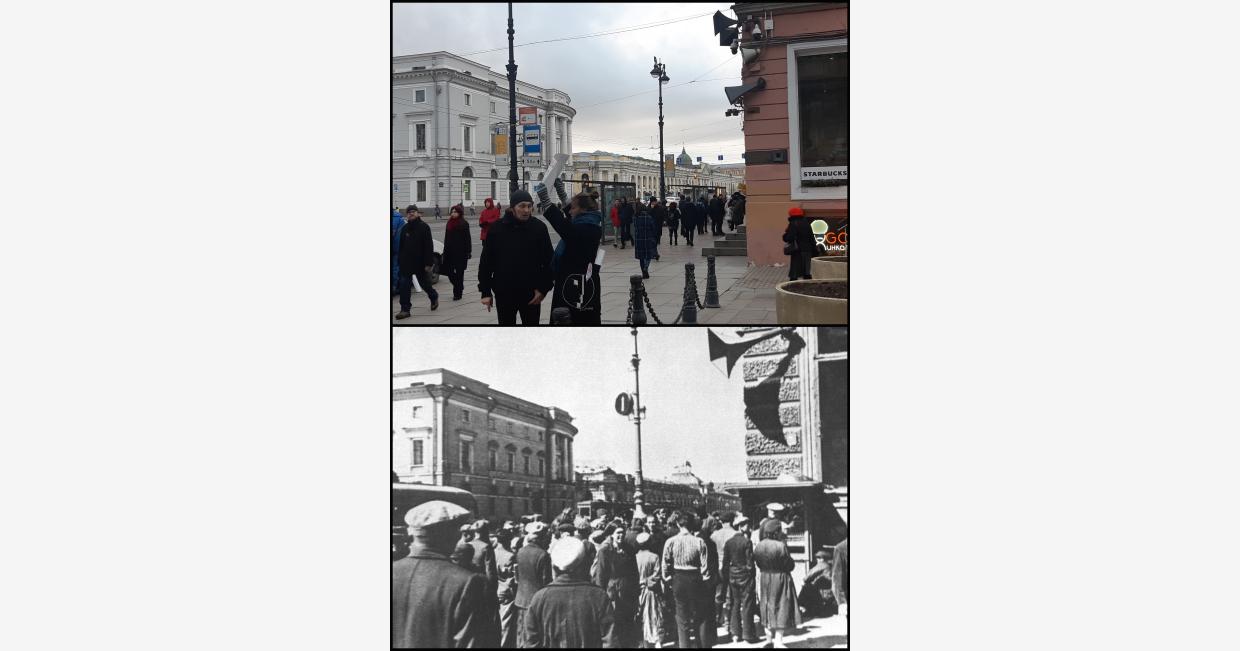 Corner of the prospekt of the 25th of October and Proletkulta street. June 1941 / Corner of Nevsky prospekt and Malaya Sadovaya, June 2021. I took this picture today.

From the diary of Soboleva Nina Vasilyevna (1923 - 1988). Student, later in her life she became the editor of "Siberian Lights" magazine. Online diary project Prozhito.org.

"WAR! The war has started. With Fascist Germany. The Germans have already crossed the border and fighting is going on. They bombed Kiev, Minsk and other cities.

I'm writing this at the moment and I can't believe these words - bombed? Is blood being spilled already?! At 4am?.. At 4am I and my friends were returning from the Neva river embankment... We walked along the Kryukov canal, and sang quietly: "Our beloved town can sleep still now..." And at this very time?..

It was announced on the radio at 12am. I had just woken up and was drinking tea. My mom and dad were there too - it was Sunday. The holiday cake made on the occasion of my school graduation was on the table. We were getting ready to listen to a merry Sunday broadcast about a policeman. There was a song which say: "You'd better not, citizen, you'd better not..." And suddenly, instead of this ditty: "Attention! Attention! Listen to the emergency broadcast..." And then Molotov spoke. It's war!..

What's going to happen? My dad said the Fascists would get their just desserts, but it was all pretty serious. He took his documents and went to the military draft office. My mom is trying to do all things at one time and she can't do anything right. Our neighbours only talk about the war in the kitchen and in the corridor [in a communal apartment]. I can hear Bella crying in Dolinovs' room behind the wall - they've just had a little baby boy, and now she will have to part with her husband.

I couldn't stay at home - I had to do something important and necessary immediately. I remembered that our gas mask filters hadn't been changed since last autumn - I kept trying to organise myself to do this but postponed it time after time (oh, are they really going to use chemical poison agents?!) I slung all three gas mask bags across my shoulder and nearly ran to Sadovaya street where the local OSOAVIAKHIM [Society for Voluntary Contribution for the Development of Aviation and Chemical Industry, Soviet paramilitary organisation in the 1930's] office was located. But it was closed. The street sweeper lady told us to come next morning. I walked back home along the Fontanka river and it just didn't fit into my head: as recently as yesterday night I walked here with my friends, so unsuspectingly.

All people walk fast on the street, without looking anyone in the eye. Many women are teary-eyed. Even the kids are somewhat quiet. There was a loudspeaker blaring on the corner - I listened to Molotov's broadcast once again. A crowd gathered and listened to it in silence, obviously not for the first time. And they walked away just as silently.

I came back home. Kostya called me. We went shopping. My mom told me to buy groats, pasta, and take as much as I could. But my dad told me not to provoke panic and only do shopping as usual, to buy what was really needed at the moment and not to stock up on stuff (he was already registered at the draft office as a senior commander and told to wait for a call up note: he was supposed to be called up in the next few days).

I and Kostya walked along the streets and popped into stores: indeed, some people started stocking up on food, they buy a lot, and there were often queues where they had never been before. I bought bread, vegetable oil and only one kilogram of millet. We went to the confectionery on Mezhdunarodny prospekt and bought 100 grams of toffee candies each. I thought that Kostya might be eating candies for the last time, cause he was to turn up at the draft office tomorrow, and shoved my little parcel in his hands when we said goodbye to each other. He promised to call me tomorrow right from the draft office. His mom is crying a lot, and that's why he and his father decided to postpone his departure till tomorrow. It was impossible to either talk or think about anything, just one thing turning around my head - and we left each other early. Will he really not be allowed to go back home tomorrow? Where should I go then? Should I become a nurse or go to a war factory? But I have no skills to speak of! Should I go to my Aviation Institute? They might tip me off there, recommend me some courses or something. I'll consult Ada tomorrow.

I'm so exhausted I'm about to fall asleep, although it's only 9pm. I'm going to bed. The first night of the war. How many more of them will there be?"