Now and then - Nevsky Bridgehead 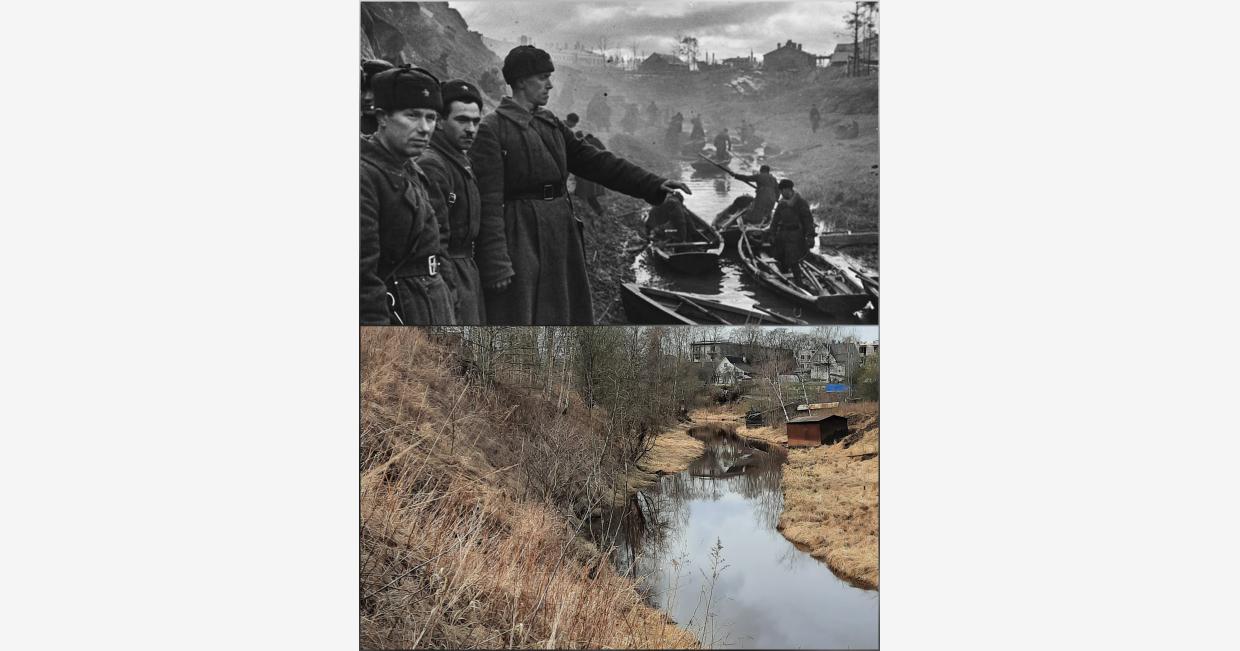 Soviet soldiers preparing rowing boats to sail down the Dubrovka river which flows into the Neva. This allowed them to spend less time on the right bank of the Neva river and the ferry crossing itself, both of which were easily observed and continuously shelled by German troops.

On this day, 79 years ago, the last defenders of the Nevsky  Bridgehead met their fate by the steep bank of the Neva river. The bridgehead was formed in the night of September 20, 1941 as part of Zhukov's attempt to link up with the Soviet troops on the other side of  the German "bottleneck" and regain control of the Tikhvin Railroad, effectively relieving the siege of Leningrad. Several bridgeheads were  formed by the troops who only had 1-2 days of preparations, but only one, located opposite to the village of Nevskaya Dubrovka, survived, and came to be known as Nevsky Pyatachok, or the Nevsky Bridgehead. From the very first days of its existence it became the site of ceaseless fighting, the ferocity of which could only be rivalled by Stalingrad. Starting from October 1941 it became the focal point of all efforts of the troops inside the "Iron Ring" of the siege to break the German  encirclement. However, instead of becoming a springboard for a successful breakthrough, it only became a mass grave of about 50 000 Soviet soldiers the size of one third of a square mile.

By April 1942 the bridgehead was defended by the 330th regiment of the 86th Rifle Division. In the middle of the month the ice on the Neva river started cracking, which complicated the delivery of reinforcements and supplies  from the other bank, and by April 24th huge floes were drifting down the  river, making it impossible to cross the river. This was the day when  the German commanders decided to put an end to the "festering sore on the side of the 18th Army" as it was referred to in some German documents. On the first day, the troops of the 1. Inf. Division drove a deep wedge into the Soviet positions in the northern side of the  bridgehead, cutting off its narrow panhandle which stretched along the steep river bank towards the 8th Power Station, a heavily defended  German strongpoint. In two days the Germans dealt another blow to the already heavily bloodied regiment, attacking from the southeast and splitting the defenders in two, mopping up pockets of resistance while  slowly and inexorably moving towards the river. On the 26th the regiment's position became untenable, and the reinforcement of a 400 man  battalion which was sent to support the defenders, lost more than a half of its strength to artillery fire during the crossing. By the evening of the 28th the last pockets of Soviet resistance were eliminated, although some soldiers were reported to have fought on for the next couple of days. Exactly 5 months later the bridgehead was recaptured by Soviet troops and the fighting resumed anew.

From the memoirs of Poresh Yuri Reingoldovich. Born in a Russian-German family in Kiev. He wasn't allowed to join the army in 1939 because of his ethnic roots, and he decided to enter the Lesgaft Physical Training Institute in Leningrad. In June 1941 he volunteered to fight in the 4th People's Militia Division. In December 1941 he took part in the defence of the Nevsky Bridgehead.

"At the dawn of the ninth day, after another sortie to obtain provisions and their distribution among the platoon, which shrank to less than a squad, a mortar shell exploded next to the burrow leading into our shelter. One of my comrades, the Leningrad truck driver Misha, was killed outright with a shell splinter to the temple. I was wounded in the head and left ankle. The third of us, Oleg, a school teacher by trade, was observing our sector and probably, in a state of shock, tried to jump out of the shelter, but in doing so he was immediately killed by a German sniper who had been hunting us for the whole week. His body slid downward, towards my feet. I remained alone, wounded and suffering from concussion damage, but still alive. I tried to help the lads, but after realising they were beyond any help, laid them near me on the shelter's floor, closed their eyes, covered them with a cloak and bade them farewell. I used my medical kit to bandage my head, but I couldn't take the boot off my wounded foot. I had to keep firing no matter what, just to let everyone know our foxhole wasn't empty and wait for the replacement troops. Anyway it was impossible to get to the river bank before dark.

This is how I spent this brief winter day next to my killed comrades, with whom I spent time together in the hospital, convalescent home battalion, with whom I went to Dubrovka, got ferried across to the left bank and fought the Germans all these days shoulder to shoulder. Only after the replacements arrived, deaf and with a dull headache, weakened by blood loss, I crawled towards the river along the narrow gauge railroad, the remnants of which partially shielded me from the light of flares and sniper fire. By night I managed to reach the medics' dugout where my wounds were treated and dressed, and I was left on the river bank to wait for the arrival of the ferry boat.

In the morning the shelling of the ferries, which delivered another batch of reinforcements, intensified. These were the boats used to get the wounded, who crowded around the medical company. I was on one of these. Just as we sailed off, a part of the tall river bank where the tunnel for the medical shelter was made, got collapsed by the burst of a heavy artillery shell. The doctors and nurses who had just helped us, warmed us up and gave us half a cup of vodka each, all remained in this mass grave.

The chances of reaching the right bank of the Neva across the water that boiled with ceaseless shell explosions were terribly slim. Our boat was hit by a German mortar shell at the very edge of the right bank, and everybody sitting in it immediately found himself floating in icy water. The dead remained in the water while those wounded for the second time were helped to crawl onto the beach by the ferry personnel. I regained consciousness in the field hospital on the second day only."